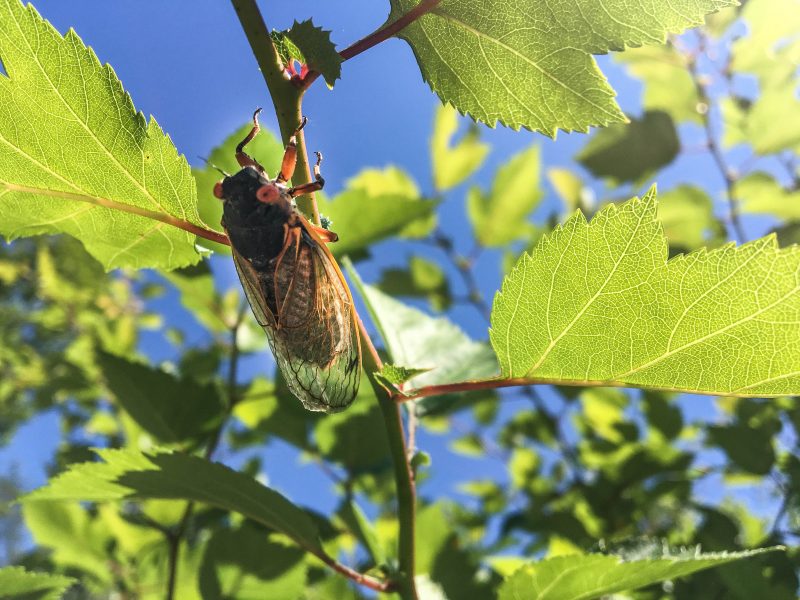 A periodical cicada perches on a maple branch. These cicadas live underground as larvae for 17 years before emerging in unison to perform a cacophonous mating ritual. Periodical cicadas are only found in eastern North America where their populations increasingly intersect with cities. Photo by De Anna Beasley

Clint Penick, Assistant Research Professor in the Biomimicry Center, has a new paper out on urban cicadas that found cities disrupt a widespread body size pattern in urban cicadas. Cicadas follow a body size trend, called “converse Bergmann’s rule,”where northern cicadas tend to be smaller than their southern relatives. But in cities, the work by Penick and Assistant Professor De Anna Beasley of the University of Tennessee, Chattanooga, found that city cicadas in the north were much larger than their rural counterparts.

What causes urban cicadas to grow so large? The authors think it might be due to the “urban heat island” effect, where pavement in cities absorbs heat and raises urban temperatures that could lead to larger growth. This is the first evidence that cities disrupt these large-scale body size patterns, though we don’t know if urban heat poses a challenge to cicadas.

Penick says, “I’ve been fascinated by periodical cicadas for many years. These are among the longest-live insects on the planet—the adults we studied were 17-years old.” Periodical cicadas are only found in eastern North America, and they emerge in 17 and 13-year cycles. These strange cicadas are a part of America’s natural heritage and occur in no other place on Earth.

While urban cicadas appear to be relatively healthy, Penick says there is still reason to continue to study these populations. “Two periodical cicada broods have gone extinct in the last century, including the Florida Brood, which I would have gotten to see in my hometown had they not been driven extinct before I was born.” Continued monitoring or urban cicadas

Also, if you happen to live near where one of these emergences occurs, Penick says that it is worth the drive. “At least one brood emerges in the US every year, so it is often only a short trip to see them. The sound they make when they call in unison is unreal.”